Increasing awareness about pollution and the need of environmental protection is affecting crackers’ sales this Diwali. The sales of sweets increases every year during Diwali as people prefer sweets to crackers. Nearly 10,000 firecracker shops are erected during Diwali in AP state but this year only half the number has started to sell firecrackers. 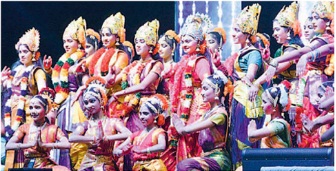 People with a traditional bent of mind lament the changing of Diwali celebrations from crackers to sweets and seek to keep the spirit of Diwali at least with eco-friendly firecrackers. Firecracker shops registered low business in Vijayawada, Guntur, Ongole, Nellore, Eluru and other areas of AP state but the sweet shops are doing brisk business across the state.

The Prayoj Foundation India is conducting a traditional Diwali with lamps and donating the money which would have been spent on firecrackers to orphanages at Vijayawada and other places. According to traders, Diwali cracker sales starts two weeks before the festival by wholesalers and one week earlier by retail shops.

Firecracker traders do a brisk business of nearly Rs. 600 crore every year but this has dropped to Rs.400 to Rs.500 crore due to the decrease of firecracker sales in the past two years. Polimetla Purnachandra Rao, G. Subba Rao and others said that earlier children used to demand firecrackers to celebrate Diwali but the vast awareness programmes about the spread of pollution and protection of the environment has changed the mindset of children.

They stated that children are not asking for firecrackers which create sound and smoke pollution and prefer to celebrate Diwali with colourful lamps and eco-ftiendly light sparklers and sweets. Wholesale trader B. Eswara Rao said that production at Sivakasi has also fallen down due to 18 per cent GST on firecrackers. He said that this year, sales started on Tuesday — only one day before Diwali.

Note: The traders say that besides awareness about the environment, the restriction of the apex court on timings of bursting of firecrackers has discouraged people from celebrating a traditional Diwali.