Danger Zone is a Kannada horror thriller movie that was released all across the country on 23rd September 2016. The movie stars Roopesh Shetty in the protagonist role.  There are many actors in the movie and few new faces too.  The movie is directed by Devarajkumar who worked in the industry for 13 long years as a makeup man.  The music for the movie is scored by Satish Aryan.  The cinematography is handled by Vinash Murthy and editing is done by Akshay Rao. The movie is produced by Swagath Gowda under Kambadri Entertainment. 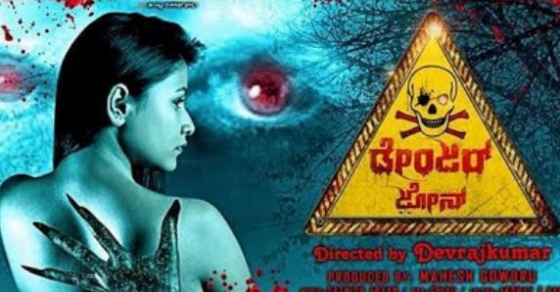 With this movie makeup man Devaraj Kumar has turned into a director. It is the debut film for him as a director.  Roopesh Shetty is being introduced as a protagonist with this flick. It is a horror thriller that was inspired by real life incident.  It is said that the storyline is suggested by a friend of the director. Director Devaraj has worked on the storyline and made it a horror story and titled it as Danger zone.  Danger zone starts with a mysterious search to find the truth which turns into an unknown revenge in a deep wood forest.  Most of the movie was shot in forest and in dark.  After realizing the hidden truth, who will survive, the demon or the human is what audience has to watch on the big screen.

Danger Zone introduced to radio and video jockey Roop Shetty for the lead role in the flick.  Uday, Abhiseksh are the other cast of the flick.  In the flick they find three connecting roads in the village which forms the base of the story.  The movie has got holly graphics and best sound effects.  In horror movies, sound effects are the main hero.  Without them it is impossible to make the movie work.  The sound effects in the movie are literally worth fearing.  The picturization in the forest was well depicted by the cinematographer.  One of the songs was sung by Shankar Mahadevan, which received huge positive response from the audience.  Danger Zone is a horror thriller that has good amounts of horror elements all over the movie.  The director even after being the debutant did not show any signs of newness.  Taking the horror movie as the first movie itself is a challenge.  He did give his best as a director.

The movie has received positive talk from the audience.  Public received this horror thriller well than expected.

The danger zone is a low budget movie and has young actors, but being horror movie it has made some decent business at the box office on its first day.