Doddmane Hudga Kannada Movie Review Rating :  Doddmane Hudga (2016) is a much anticipated Kannada movie that features power star Puneeth Rajkumar in the protagonist role. The movie was released in about 600 screens all across the country on 30th September, 2016. The movie was directed by Duniya Soori who previously teamed up with Puneeth for three films.  This is the fourth film for director hero duo. The movie is produced by M. Govinda under Ajay Pictures.  The movie is co-written by director Duniya himself. It is the 25th film for Puneeth as a hero and the expectations are totally skyrocketed.  The movie stars Radhika Pandit in the female lead role.  The music for the movie was scored by V. Harikrishna. 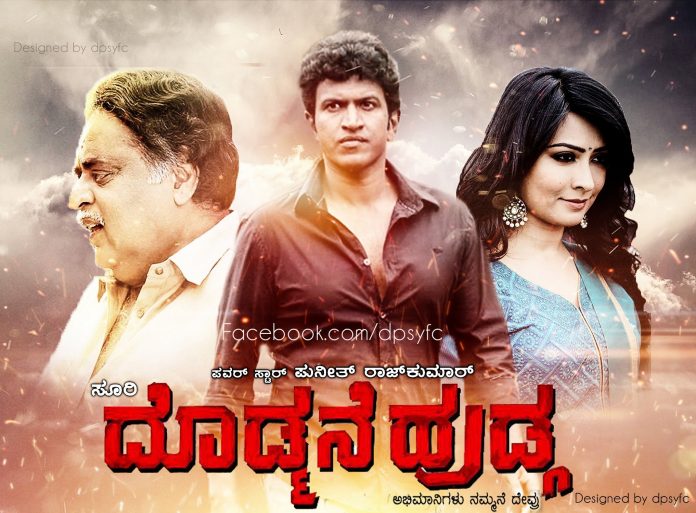 Doddmane Hudge is an out and out comedy action entertainer.  The trailer which was released last month has gained very much good response from the audience.  The movie revolves around the main lead Puneeth who plays the role of a man who follows his own principles of living.  It is a complete mass entertainer that has got all the elements in right amounts.  The movie will definitely attract huge number of moviegoers to run to the theaters.  The movie has got wonderful story line and the love story between the leads is a highlight.  Mass audience will really be attracted to the movie.  Puneeth will be seen in a role that will be loved by all the moviegoers.   The movie has got star cast like Radhika Pandit, Ambareesh, Sumalatha, Bharathi Vishnuvardhan, Srinivasa Murthy, Krishna, P. Ravi Shankar, Rangayana Raghu, Chikkanna, Avinash, Santosh, Udaya Raghav etc.

Doddamane Hudge is a movie that has all sorts of elements that moviegoers look for like action, drama, comedy, romance, love etc.  Power star Puneeth will be seen in the lead role and he is definitely going to be appreciated for the most commendable performance in the movie.  The movie has got good sense of action sequences and love scenes.  The timing followed by Puneeth is appreciable.  The movie has got decent technical aspects.  The music scored by V. Harikrishna is an asset to the flick in every way.  Director Duniya Soori has yet again delivered a wonderful movie.  Being the 25th film for Puneeth this movie was taken with much sincerity and love, which can be seen onscreen.  The dialogues are pretty notable and will strike the audience quite hard.

The first day collections of Doddmane Hudge movie are quite good.  The movie was screened in more than 600 screens all across the world.  The movie has yielded about one crore on its first day.  The exact number will be updated as soon we get the info.