Intlo Deyyam Nakem Bhayam is a Telugu horror-comedy movie directed by Nageswar Reddy G.  The movie stars Allari Naresh and Kruthika Jayakumar in the lead roles.  The movie is bankrolled by BVSN Prasad.  The movie features music composed by Sai Karthik.  The movie has hit the silver screens all across the Telugu speaking states on 30th December 2016.  The trailer of the movie got released a couple of months ago which received an average talk.   The movie is first slated for 18th November release, but due to demonetization effect, the makers have postponed the release. 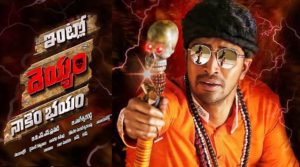 Intlo Deyyam Nakem Bhayam is a horror comedy movie that features Allari Naresh, Kruthika Jayakumar in the lead roles and Chalapathi Rao, Shakalaka Shankar, Rajendra Prasad, Posani Krishna Murali in supporting roles.  The movie has received a decent talk from the audience so far.  Allari Naresh previous movie ‘Sudigadu’ did not do well at the box office, but now finally he seems to bag a success after a long time with IDNB.  The movie revolves around the ghost that stays in a housed owned by Rajendra Prasad.  He takes the help of Allari Naresh who dons the avatar of a mantric to get rid of the ghost from the house.

Allari Naresh as always has done a great job in his role.  His comedy timing is perfect.  The first half has got some good points to note and second half drops a bit. The dialogues are rib-tickling at times.  The movie has got a predictable climax.  The screenplay is good as well.  Director Nageswar Reddy has done a good job.  Though the storyline is nothing new, the way the director handled it is notable.

If you like horror comedies and are okay with routine storyline then you can enjoy the last weekend of the year to the core watching Intlo Deyyam Nakem Bhayam.