Parched is a Bollywood movie that has hit the screens on 23rd September, 2016.  The movie stars Tannishtha Chatterjee, Radhika Apte, Surveen Chawal and Adil Hussain in main roles.  The movie is directed by Leena Yadav who previously directed movies like Teen Patti and Shabd.  The movie produced by Ajay Devgan, Aseem Bajaj, Rohan Jagdale, Gulab Singh Tanwar under Ajay Devgn Films.  It is a rural movie and was released in overseas exactly a year ago. The cinematographer of Titanic, Russell Carpenter has worked for this flick and Kevin Tent has been the editor of the flick 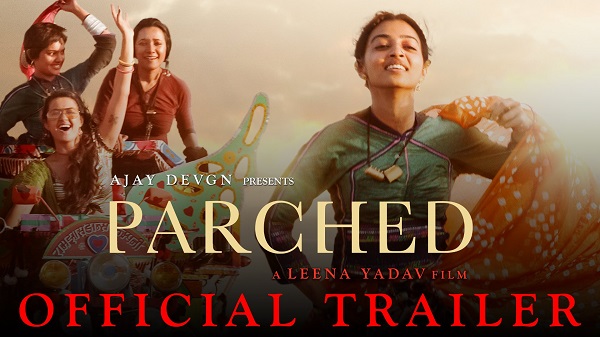 Parched is a movie about lives and desires of three women in rural west.  The movie showcases three women and their lives in detail.  A widow Rani which is played by Tannishtha, a barren Lajjo played by Radhika Apte and a sex worked Bijli played by Surveen Chawla.  These three women belong to North Western Region in India and are victims of traditions like child marriage, physical abuse, alcoholic husband etc.  The movie story revolves around these three characters solely.  Rani is widowed for 17 year and has a son and Lajjo is a barren who is physically abused by her husband every day whereas Bijli is a prostitute.  Lajjo and Rani share their stories and feel at peace.  They get to meet with Bijli and bonds with her.  They discuss about love, men, and sex.  How they deal with their lives how they fulfill their desires, and how they face the society forms the rest of the story.

Leena Yadav has come up with out of box story this time unlike her previous films.  This movie will point out at the traditions of the country that are dragging the young women down.  The three protagonists gave their life and soul into their characters.  The characters suffer a lot due to the men they are bound with, the society they were living, and the traditions that are binding their hands from living the life.  This film from Leena Yadav is much relatable to Pink which was released last week.  It will raise many questions and focuses on the issues that most of the women are facing.  The movie has got wonderful dialogues that will slap us on face.  Oscar award winning cinematographer Russel Carpenter has brought life to the flick.  The editing by Kevin Tent is absolutely notable.

Parched movie has made a good business on its first day.  Though it took time for the audience to accept what the movie has said, it has made some decent collections.

Lately public were receiving these type of stories very well and this movie is no exception.