Saat Uchakkey is an Indian comedy film directed by Sanjeev Sharma.  The film stars Manoj Bajpayee, Anupam Kher, Kay Kay Menon, Annu Kapoor, Vijay Raaz, and Aditi Sharma.  The movie was released on 14th October, 2016.  The movie is produced by Wave Group Company.  The music was scored by Abhishek Roy.  Saat Uchakkey is about seven thieves who feel proud that they are in the profession of robbery.  The movie is supposed to be released in 2012/2013, but due to some issues it has delayed till date.  The movie has got 90 cuts from the censor board. 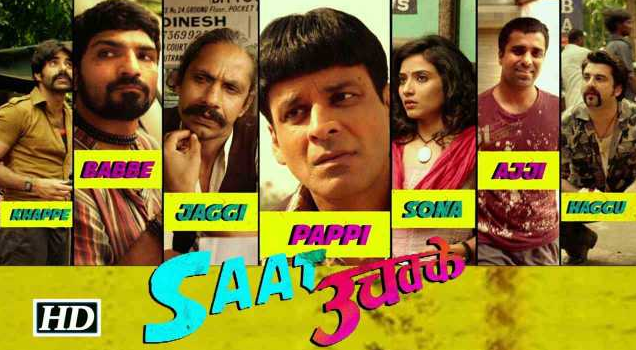 Though the movie is promoted and tagged as a comedy genre film, it is little hard to find the exact sense of comedy the makers spoke about.  It seemed as if Manjo Bajpaye and Kay Kay were wasted in their roles.  It is a loud film and even the authentic settings did not work out.  The dialogues are senseless and misplaced.   The movie has got no proper story and the story telling by the director is very poor.  Even the second half continues to be same without any promising scenes to look forward for.  The characters ramble very boring and length stuff all the time.  Vijay Raaz and Kay Kay Menon have boosted the movie a bit with their comic timing.  Anupam Kher plays a cameo in the flick, which does not carry any importance at all.  Anu Kapoor character is left to the viewers to figure out.  Manjo’s character and his looks in the film were seriously terrible.  It s difficult to predict what the director is keep on wanting to say to the audience with his flick, but it is clear that his execution has turned out to be wrong.

There is nothing much to say about what the public has felt after watching the flick.  The movie has not received much of a positive talk since its release and the talk is much less than mixed talk.

The movie released in many theaters all across the country.  It has collected kind of decent amount on the first day.  We will update the exact collections on the first day soon.