S 3 is a sequel of 2013 blockbuster movie S II starting Suriya, Anushka Shetty and Sruthi Hassan in the lead roles.  The movie is directed by Hari who previously directed the first two parts.  S 3 is dubbed into Telugu as Yamudu 3.  The movie opened into the theaters on 9 February 2017.  The movie has opened up for great collections.  The movie was first scheduled to be released on 26 January, but the date got changed and finally the movie has hit the screens on 9th February.  Si 3 or Yamudu is a popular movie series of Suriya.  The previous two parts stood as blockbuster hits in Suriya’s carrier and this movie is also walking in the same line right now.

The music for the movie is composed by Harris Jayaraj, who gave music for previous parts as well. The movie is said to break the box office records set by his previous movie 24.  It is an action masala film in which Suriya will be seen as a cop.  The movie features Anushka Shetty who is the same main female lead in previous parts too.  Sruthi Hassan will be seen playing the second lead lady of the flick opposite Suriya.  The movie is bankrolled by K.E. Gnanavel Raja and Dhaval Jayantilal Gada.  Editing is handled by V.T. Vijayan and T.S. Jay.  The cinematography is one by Priyan and the movie is produced under Studio Green, Pen Movies and Aadnah Arts Banners. 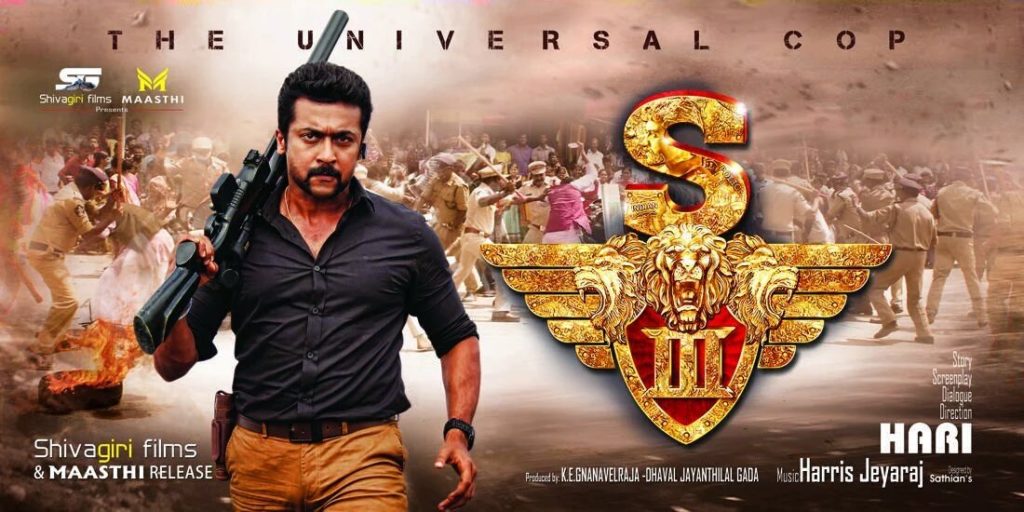 Si 3/ S3 movie got released all across the Tamil and Telugu speaking states.  All the songs from the movie received positive outcome.  Just like other movies of Suriya, this movie also opened grandly into the theatres.  Suriya will be seen playing DCP in the flick.   As always, Suriya gave a tremendous performance as a cop.  Anushka and Sruthi Hassan fulfilled their roles perfectly.  S 3 received good response from the audience both in India and in overseas.  The trailer skyrocketed the expectations on the movie and the movie stood up for the expectations of the audience.

The first two parts of Singam are pretty big hits in Suriya’s carrier.  They did so well that the director has come up with a sequel again.  The news is that the third party is far better than the first two parts, which itself proves how well the movie came out.

Si 3/ S3 is doing very well at the box office.  As there is no neck competition for the movie right at the moment, most of the public opted to watch S 3 movie.  The movie is bankrolled with 75 crores budget, which is one of the biggest budget movies of Suriya.  The movie has done some handsome business at the box offices here in India as well as in overseas.  The movie is said to cross 100 crores and join the 100 crore club.   Suriya’s previous release 24 also grossed 100 crores.