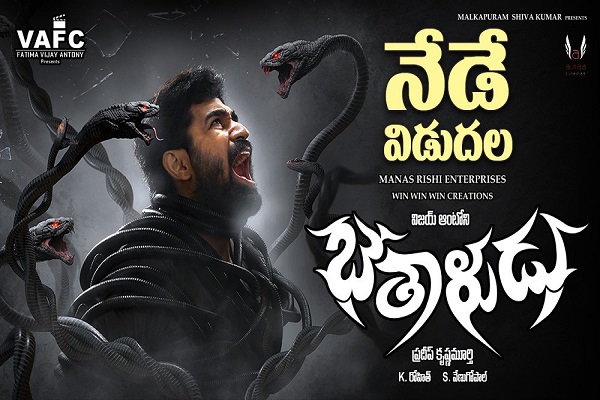 Bethaludu, as the name suggest, is a thriller movie.  The movie was made based on a popular novel ‘Girl with a Dragon Tattoo’.  The movie was produced by Fathima Vijay Anthony.  The story was written by Pradeep Krishnamoorthy, Joe D Cruz, Karthik Krishna.  Music for the flick is scored by Vijay Anthony himself.  The cinematography is handled by Pradeep Kaliprayath.  Veera Senthil Raj did the editing.  The movie is produced under Vijay Antony Film Corporation Company and distributed by Auraa Cinemas.  The movie is a thriller movie.  The movie features Meera Krishnan, Charuhasan, Y.G. Mahendra, Siddhartha Shankar, Kamal Krishna, Aadukalam Murugadoss, Vijay Sarathy and Kitty in supporting roles.

Bhetaludu movie has received a positive response from the audience since a five-minute video about the movie got released.  Vijay Antony is one of the finest actors of the present time.  He has been coming up with unique stories lately.  His previous movie Bichagadu has been a great success and now he has come up with yet another unique story with Bhetaludu movie.  The audio of the film is released on November 3rd, 2016.  The music rights have been purchased by Sony Music while the satellite rights of the flick were acquired by SUN TV channel.

Bhetaludu has received a good talk from the audience.  Vijaya Antony released the official teaser on YouTube on 19th September 2016.  In just a couple of day’s time the video was viewed 2.7 million times.  First the first ever time the makers have screened 5-minute opening video of the flick, which received a great response.

Bhetaludu movie was made on a budget of 10 crores.  It has collected decent money on the first day.  The exact first-day collections will be updated on our page soon.