Indian Test Cricket captain Virat Kohli and our own Oscar winner AR Rahman get a wiggle on for the Premier Futsal Anthem.  The Futsal Anthem is composed by A R Rahman for which Virak Kohli has lent his voice.  Virat who has been recently seen dancing in his peer’s marriages and other parties, will now be seen shaking his leg with A R Rahman in the video of Futsal Anthem.

Virat has signed as the brand ambassador for the first Premier Futsal League.  The much anticipated video of Premier Futsal Leauge is finally out.  A video of duo dancing for the song was going viral in the internet already.  The title track of the song is ‘Naam Hai Futsal’ for which both the boys have been dancing with lots of excitement. 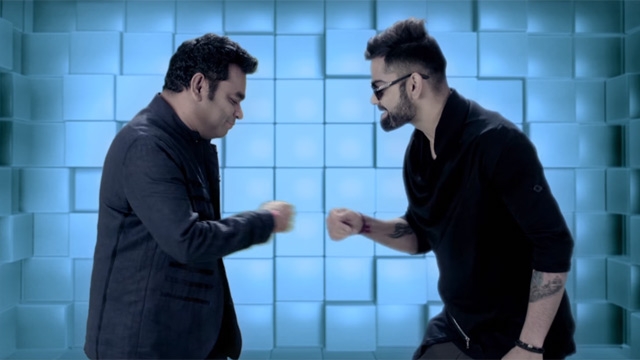 Virat says it was his privilege to work with AR Rahman

The song was peppy and will be a sure shot hit, all due to the Virat-Rahman duo that made it happen.  This is the first time that Rahman has scored music for franchise-based sports league in the country.

At the launch event that was held at Mozart of Madras, Rahman said that “I am proud to associate with Premier Futsal for the league’s official anthem.  It makes me happy to see such young entrepreneurs being passionate about the sporting scenario of the country and I wish them all the success in this venture.  I am especially excited to work with Viral Kohil on this, let’s hope he is as good with his melody as he is with his bat!”

Kohli, who is the brand ambassador of the league, said that “I have been a fan of AR Rahman for years.  It will be a personal achievement and also a privilege to share the screen with him and lead my voice to the anthem of Premier Futsal.”